Marble Madness, released by Atari in 1984, was one of the most difficult games we ever played.  Just because we sucked at it did not mean anything, however, because the game went onto become one of the most profitable and sought after games in the arcade.  The premise of the game was relatively simple.  The idea was to guide a marble through a series of six courses, using a trackball, while avoiding enemies and beating the clock.  Each course was a unique isometric maze, and the player viewed the tracks from an angled top down perspective.  If the player was able to finish the course before time elapsed, any left over time was added to the next round. 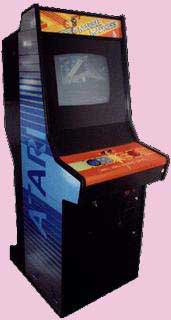 Marble Madness was released for home consoles like the NES, and in later years as part of the Midway Arcade Treasures and Midway Arcade Origins classic arcade game compilations.