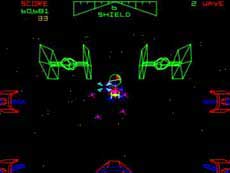 Star Wars was a first person space simulator game released by Atari in 1983.  The game followed the Death Star portion of the story line from the Star Wars Episode IV: A New Hope film.  It was available in both standup and sit-down versions, and featured the digitized voices of characters from the film.  This game was one of our favorites to play, and we wasted countless hours and quarters in the effort. 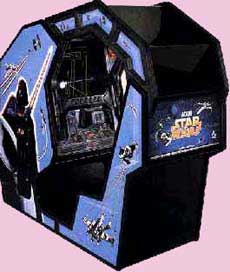 Star Wars was created using wire frame vector graphics, similar to games like Battlezone and Red Baron.  In the game, the player assumes the role of Luke Skywalker, pilot of an X-Wing Fighter whose job it was to blow up the Death Star.  The player must advance from level to level with at least one of his six shields still in place, or the game was over.  In the first stage, the player battles a contingent of Tie Fighters near the Death Star.  In the second level, the player moves to the surface of the Death Star, where he must destroy laser turrets and towers.  In the final level, the player is in the trench that leads to the exhaust port where photon torpedoes must be fired.  Blowing up the Death Star in round one was not terribly difficult, but as gameplay restarts, it becomes harder and harder to once again blow it up.

Star Wars was developed for a number of home console systems, like the Atari 2600, Atari 5200, ColecoVision, and the Commodore 64.