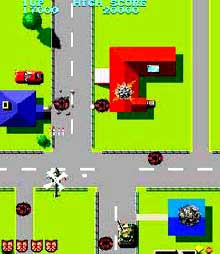 Tiger-Heli, released in the USA by Taito (1985), was a vertical scrolling helicopter fighting game.  It was the prequel to Twin Cobra, which was released in 1987, and Twin Cobra II, released in 1995.  In Tiger-Heli, the player controlled a helicopter, blowing up tanks, battleships, artillery, and launching aircraft.  Missiles were the main weapon, but the helicopter also featured bombs that would destroy everything within a blast radius.  Flashing crosses could be picked up at various points in the game that would give the player power ups, such as a smaller helicopter that would fly on one side of the main helicopter and fire when the main weapon was fired.  One enemy hit would destroy the copter, and gameplay started with 3 lives.  There were four levels, which would repeat, and bonus points would be earned by destroying peripheral objects like buildings and oil tanks.

Both Tiger-Heli and Twin Cobra were released on the NES, with Twin Cobra being released on a few more (Sega Genesis, TurboGrafx-16, etc.).  Twin Cobra, with a few differences, was basically the same game as Tiger Heli. 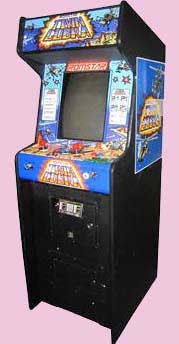