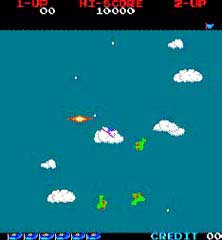 Time Pilot was a 1982 Konami game, released by Centuri in the USA.  Time Pilot was a very popular game, and one of the first to allow the player to freely move in all directions (like Bosconian).  In this game, the player controlled a futuristic fighter jet in order to rescue fellow jet fighters who are trapped in other eras to time.  The game starts out in 1910, with the player battling biplanes and a big blimp.  It then moves from 1940 (planes from the WWII era and a B-25 as the level boss), to 1970 (helicopters and a CH-47 boss), to 1983 (jet fighters and a B-52 bomber), and finally to 2001 (UFO’s).  Once the player finishes all the levels, the levels restart at greater difficulty levels.

Many of you will remember the arcade sequel to Time Pilot, Time Pilot ’84 (1984), which basically followed the same premise (cabinet pictured below), but with different enemies and backgrounds.  Time Pilot was released for the home on systems like the Atari 2600 and ColecoVision, and in later years was released on the Xbox, Gameboy, Nintendo DS, and PlayStation as Konami Arcade Classics, Konami Collector’s Series, Konami Classic Series, or Microsoft’s Game Room.