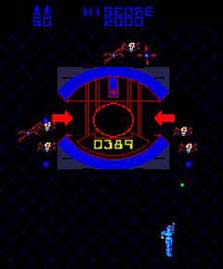 Tron was an arcade game distributed by Bally Midway in 1982.  We loved to play this game back in the day, and one quarter would last a while if you were the least bit good at it.  The game was based on the Disney movie by the same name, and became very popular.  There were four main game levels that would repeat and increase in difficulty if the player continued to advance.  In the first level, the player had to shoot spider like “Grid Bugs” in order to clear a path to the center of the Input/Output Tower (before time ran out).  The second level was an MCP cone, where the player had to shoot a number of bricks (like Breakout) and get inside the cone.  The third level, the Battle Tanks, was not necessarily inspired by the film, as it featured the player as a tank, driving through a maze, battle enemy tanks (in later stages, the tanks become floating vehicles call “Recognizers”).  The fourth level, Light Cycles, is the most recognizable level from the movie.  In this level, the player drives a Light Cycle in an arena in an effort to cut off, and destroy, enemy light cycles.

Many of you will remember the 1983 sequel to Tron, called Discs of Tron.  Over the years, there have been a number of spin-off games released for both the old school home arcade (Tron: Deadly Discs for the Atari 2600), but also for new systems like the Gameboy and Xbox (Tron 2.0 Killer App, Tron: Evolution).