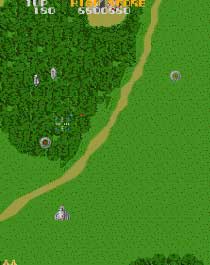 Xevious, created by Namco and distributed by Atari (1983), was a vertical scrolling shooter game.  Because a single quarter would last a while, it was by far one of our 80’s arcade favorites.  In this game, the player piloted a combat ship called a Solvalou.  The Solvalou had lasers and bombs, and went about the business of blowing up ground targets, as well as incoming waves of ships, as it scrolled through varying terrain.  Ground targets included things like tanks, vehicles, buildings, and turrets.  At the end of the level, there was a mother ship (called Andor Genesis), making Xevious one of the first games to incorporate such a feature.   There were 16 total playing areas that would loop. 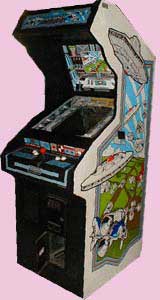 In 1984, Super Xevious was released, which was essentially the same game, but with a few new enemies and much harder.  Xevious was developed for a number of home console systems, such as the Atari 7800, NES, and Apple II.  As the years have gone on, tons of spin-off games have been released, such as Xevious: Scramble Mission and Xevious Resurrection.  In the later years, the original game was re-released for contemporary systems like the Xbox, PlayStation, and Wii under the Namco Classic Collection, Namco Museum, and Microsoft’s Revenge of Arcade compilations.  The game was even featured on one of the Jakks Pacific handheld TV units.