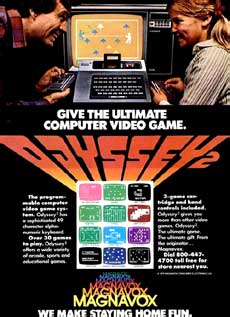 Phillips Magnavox was fist to the video game console market with the release of the Magnavox Odyssey in 1972 (even beating the Atari Pong to market).  Magnavox released a number of iterations of their original unit throughout the 1970's, until the Odyssey 2 was released in 1978.  The Odyssey 2 was a revolution in gaming because it was the first system on the market that had interchangeable gaming cartridges.  It also included a keyboard, which was used for option selection and educational games.  The Odyssey had some other notable features, such as a speech synthesis unit and cutting-edge games like Quest for the Rings, Conquest of the World, and The Great Wall Street Fortune Hunt. 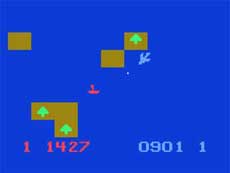 The Odyssey 2's main competition was the Atari 2600, Intellivision, and the Bally Astrocade.  The system did not offer as many colors as its competition, but it made up for it in different ways (superior game programming, for example).  The number of games produced for the system was very limited due to the fact that third-party development was not encouraged until it was too late.  Still, sales in the USA were brisk, but they were even better in Europe, where the system was known as the Philips Videopac G7000. Pictured above is the game Conquest of the World, and below the game Quest for Rings. 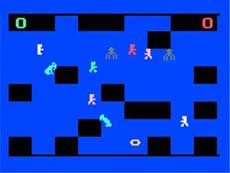