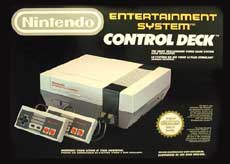 The Nintendo Entertainment System (NES) was an 8-bit gaming console launched in Japan as Famicom in 1983 (the Super NES was not released until the early 1990's).  It wasn't until 1985 that North America began seeing the units on store shelves (1986 in Europe and 1987 in Australia).  The NES ended up being the best-selling gaming console of the 1980's, due in large part to Nintendo's open third-party developer licensing.  In fact, the NES was the origin of a number of gaming franchises that still existed at the time of this writing, including Super Mario Bros, The Legend of Zelda, Metroid, Castlevania, Final Fantasy, and Dragon Quest. 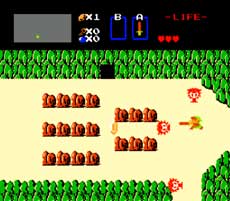 There were a number of different console bundles a person could purchase, including a $199 version that included the Robotic Operating Buddy (R.O.B.), the NES Zapper light gun, two controllers, and the games Gyromite and Duck Hunt.  A smaller version included Duck Hunt and Super Mario Bros, which is the unit most people owned.  Nintendo flourished at a time when gaming was considered a passing fancy, and the NES survived until 1995.  It was so popular, that VHS movie rental stores often also rented NES games. Above is pictured the NES game the Legend of Zelda, and below one of the most popular games for the NES, Super Mario Bros. 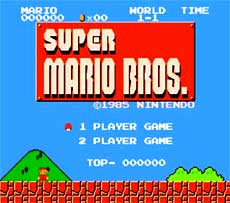