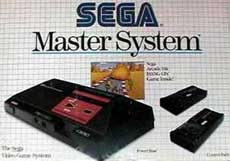 The Sega Master system started as the SG-1000 in Japan (released in 1983 by Sega, the same year that Nintendo first released the NES).  As the years went by and new iterations of the system were developed, the Sega Mark III finally hit Japanese shelves in 1985, and American shelves in 1986 as the "Master System".  The system had some cool features, such as a light gun, 3D glasses, and the ability to play both normal sized cartridges and smaller cartridges called "Sega Cards". 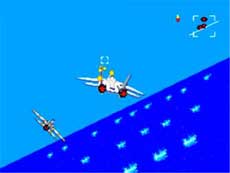 Although the Sega Master System was technically superior to the NES, Sega failed to garner the same market share as Nintendo in the USA.  Nintendo had tied up many third-party game developers to exclusive contracts, which made the game selection for the Sega much smaller than for that of the NES.  However, the Master System was a much bigger hit in Europe, where sales outpaced the NES by large margins.  Games like Sonic the Hedgehog (pictured below), Afterburner (pictured above), Streets of Rage II, and Mercs kept the masses interested until the early 1990's.

The Sega Master System In Box with Hang On & Safari Hunt, light phaser
$280.00