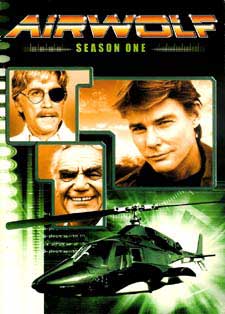 Airwolf was designed by an CIA group called "The Firm", stolen by one of its creators, and then recovered by Hawke.  Hawke some how bamboozles The Firm into allowing him to search for his MIA brother (Vietnam), while at the same time conducting secret missions for The Firm.  During the show, The Firm was both enemy and friend to Santini and Hawke, considering that they would try to repossess the helicopter any time they could.

In later seasons, evidently Hawke's from Saint John Hawke was rescued, because he (Barry Van Dyke) eventually took charge of Airwolf as Jan-Michael Vincent left the show.  Fans of the show will remember that Hawke was hurt in an explosion, taken away by his brother, with nobody knowing whatever really happened to the guy.  We think that perhaps his brother might have not taken him to the hospital, because by the time the show was in its last season on the USA network, Saint John was in charge.