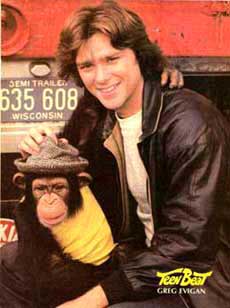 BJ and the Bear was a long running action/comedy/drama show that ran from 1970 to 1981 on NBC.  The showed starred Greg Evigan as Billy Joe (B.J.) McKay and Claude Atkins as Sheriff Elroy P. Lobo.  Greg Evigan even performed the show's theme song.  Big fans of the show may even remember that The Misadventures of Sheriff Lobo was a short-lived spin off.

In this crazy TV show, B. J. McCay traveled around the country in his fancy red and white truck with his pet chimpanzee, who went by the name "Bear."  Of course there were plenty of things to give BJ and the Bear trouble, such as corrupt sheriffs like Elroy P. Lobo, and the fact that they constantly found themselves in the wrong place at the wrong time, with some hot chic asking for help.  As the show came to an end, B.J. began running his own trucking company in Los Angeles, and another corrupt cop named Rutherford T Grant became the thorn in B.J.'s side.