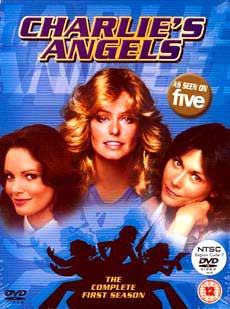 Charlie's Angels was an Aaron Spelling crime drama that ran from 1976 to 1981 on ABC.  It ran for a total of 5 seasons and 110 episodes.  The show’s first few seasons were the most popular, with cast changes in later seasons causing a drop in ratings.  The show was so popular, you could buy posters, lunchboxes, trading cards, dolls, and other toys.  Many critics of the show felt it a simple showcasing of beautiful women with no substance (T&A TV), but fans did not seem to mind.  The show was popular enough to warrant a short-lived remake TV series in 2011, as well as two movies:  Charlie’s Angels (2000) and Charlie’s Angels: Full Throttle (2003).  Some of you may even be familiar with the video games released in the 2000’s.

If you remember, the rich and mysterious Charles Townsend hires three under-rated police academy grads to be private investigators under the watchful eye of John Bosley (David Doyle).  Charlie’s initial “Angels” where Sabrina Duncan (Kate Jackson), Jill Munroe (Farrah Fawcett-Majors), and Kelly Garrett (Jaclyn Smith).  In later years, other “Angels” would cycle in, such as Kris Munroe (Cheryl Ladd), Tiffany Welles (Shelley Hack), and Julie Rogers (Tanya Roberts).  Most of the show followed the same format, whereby a crime was committed and the “Angels” would be sent in to investigate.  Episodes would rarely carry over, and each one ended with the “Angels” back in Townsend’s office where they would be congratulated on a positive outcome via a conference call.