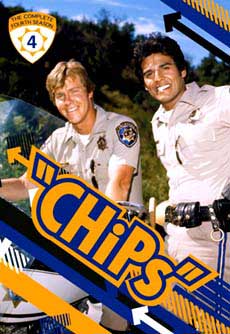 CHiPS (California Highway Patrol) was a campy cop drama that ran from 1977 to 1983 on NBC.  The main characters were Erik Estrada as Officer Francis “Ponch” Poncherello, Larry Wilcox as Office Baker, and Robert Pine as Sergeant Joe Getraer.  The show was basically about the daily adventures of Baker and "Ponch" as they patrolled the highways of L.A. on their motorcycles, and it ultimately ran for six seasons as 139 episodes.  Although it was cheesy, it was a huge hit with viewers.  In the show’s heyday, merchandising included things like action figures, puzzles, die cast cars, and of course the CHiPs lunchbox.

In many ways, CHiPs was more comedy than drama, and some of the first season shows were flat out hilarious.  There was rarely any real violence on the show, and episodes were mostly light hearted.  Ponch (Estrada) was the macho and outspoken officer, while Baker (Wilcox) was more “by the book”.  The two complimented each other nicely.  Episodes typically featured the duo on some routine patrol after a briefing from Sergeant Joe (Pine) on what bad elements to be on the lookout for that day.  And the duo’s attempt at apprehending the day’s criminals often culminated in an over-the-top car crash.  Show would end with the duo demonstrating the fun and sun of the Southern Californian lifestyle.