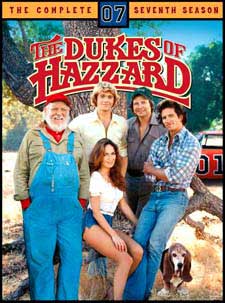 We were huge fans of The Dukes of Hazzard.  Before the days of the VCR, missing a Friday night episode of this show was torture.  The Dukes of Hazzard, which was more comedy than anything, ran from 1979 to 1985 on CBS, and was actually based on a 1975 film titled Moonrunners.  The series was hugely popular for years, with the theme song even making it as a hit on both radio and in roller rinks.  Merchandising for the show was huge, not just simply t-shirts and lunchboxes, but an entire line of toys and other products.  There was even a short-lived spin-off in 1980 based on one of the show’s characters (Enos Strate).  The main characters of the show included Tom Wopat as Luke Duke, John Schneider as Bo Duke, Catherine Bach as Daisy Duke, Denver Pyle as Jesse Duke, James Best as Sheriff Rosco P. Coltrane, Sorrell Booke as Boss Hogg, Ben Jones as Cooter Davenport, Sonny Shroyer as Deputy Enos Strate, and Rick Hurst as Deputy Cletus Hogg.

The show was primarily based around the adventures of cousins Bo (Schneider) and Luke (Wopat) Duke.  Living in Hazzard County, Georgia, the two live with their wise Uncle Jesse (Pyle) and other cousin Daisy (Bach).  Because they got caught running Uncle Jesse’s moonshine, the Duke boys are relegated (by probation) to the confines, or thereabouts, of the county.  The cousins spend most of their time running from the crooked county commissioner, Boss Hogg (Booke), and his dim witted sheriff, Rosco (Best), while at the same time getting caught up in whatever mischief is going on around them at the time.  Even though Boss Hogg is constantly plotting to put the Dukes into jail, Bo and Luke are always one step ahead, and always willing to help Boss Hogg in the end.  There were always plenty of crazy car jumps, accidents, and explosions as the Dukes tooled around in their 1969 Dodge Charger (named the General Lee).

It is worth noting that in 1982, Tom Wopat and John Schneider went on strike, so CBS brought in two replacements, Coy and Vance Duke.  These two characters made 17 episodes, but the ratings of the show dropped off so significantly, that CBS was forced to negotiate with Wopat and Schneider (the dispute was in regard to the royalties paid on merchandising).  In 2005, a full feature film was produced with new characters, and a couple of straight to DVD releases were made as well.  Nothing compares to the original.