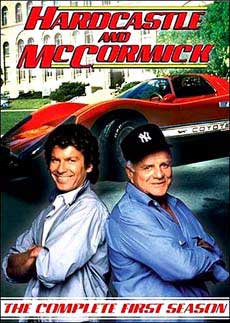 Hardcastle & McCormick was an action series that ran from 1983 to 1986 on ABC.  The show, created by Stephen J. Cannell, was essentially a newer version of a 1980 show called Tenspeed and Brown Shoe.  Hardcastle and McCormick starred Brian Keith as Judge Milton Hardcastle, and Daniel Hugh Kelly as Mark McCormick.  Car junkies will remember the red kit car, called the Coyote X, which was actually modeled after the McLaren M6GT.

Fans of this show will remember that the tough Judge Milton C. Hardcastle, who decides to retire, cannot let sleeping dogs lie.  In his file cabinet were over 200 cases of guilty crooks who escaped justice because of some legal technicality, and in retirement, the Judge planned on setting the record straight.  The Judge’s very last case is against car thief Mark McCormick, who attempted to steal the Coyote X from his murdered friend.  McCormick strikes a deal with Hardcastle, essentially agreeing to help Hardcastle not only capture his friend’s murderer, but any other crook on the Judge’s list.  And the Coyote X?  Of course McCormick is allowed to keep it and use it to chase criminals around.