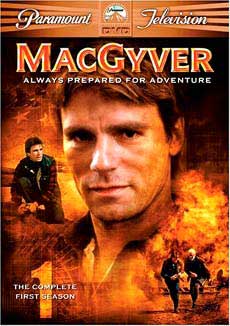 MacGyver was an action adventure series that ran from 1985 to 1992 on ABC.  "Part boy-scout, part genius, all hero" was one of the taglines from the show.  In this series, Richard Dean Anderson played the role of Angus MacGyver, a secret agent who refused to carry a gun, but could make a mountain out of a mole hill.  The show also starred Dana Elcar as Peter Thornton (MacGyver’s boss), and Bruce McGill as Jack Dalton (MacGyver’s friend).  The series was hugely popular, and it had its own line of toys and games.  At the time of this writing in late 2014, a full featured film was being considered.   Some of you may remember the two made-for-TV movies released post series end in 1994.

In the show, secret agent Angus MacGyver (Anderson) worked for the Phoenix Foundation under the umbrella of a faux government agency called Depart of External Services (DXS).  As an experienced bomb technician during the Vietnam conflict, MacGyver's knowledge of science and his infinite resourcefulness always managed to come together to save the day.  The rise in Duct tape and Swiss Army knife sales can be attributed to him, as he used everyday resources to solve complex and dangerous problems.  Although MacGyver preferred non-violent methods of getting the bad guys, he did use a gun from time to time.