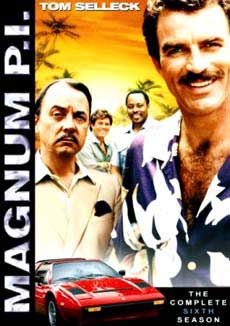 Magnum PI was an action crime drama that ran from 1980 to 1988 on CBS.  This was one of our favorite shows here at www.ilovethe80s.com.  The show revolved around Thomas Magnum (played by Tom Selleck), a private investigator on the island of Oahu, Hawaii.  Other regular characters included T.C. Calvin (Roger E. Mosely), Rick Wright (Larry Manetti), and Higgins (John Hilerman).  The show consistently ranked in the top 20 Nielsen ratings during its first 5 seasons, and was one of the highest ranking shows in United States television.

In the show, Magnum (Selleck) lives as a guest at the Robin Master’s estate at Robin’s bequest.  Living a life of luxury, Magnum was in a position to take private investigation cases that suited him, although he had to appease the estate’s by-the-book caretaker, Jonathan Quayle Higgins III (Hillerman).  Magnum would constantly find himself bargaining with Higgins for use of the estate’s amenities, such as the tennis courts, wine cellar, and the Ferrari 308 GTS.  With the help of his Vietnam vet friends Rick (Manetti) and T.C. (Mosely), Magnum would go about the business of catching the bad guy, solving the mystery, and often getting the girl.  Oddly enough, the writers tried to kill Magnum off in the 7th season, making him a ghost in the last episode, but fans hated the ending so much, that they had to bring Magnum back to life for an 8th and final season.