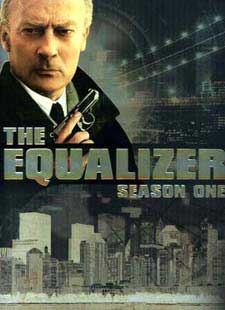 The Equalizer was a crime action show that ran from 1985 to 1989 on CBS.  In this show, Edward Woodward played the role of a retired spy, turned private eye, named Robert McCall (nicknamed "the Equalizer").  There were tons of notable guest stars on the series, including names like Melissa Joan Hart, Macaulay Culkin, Christian Slater, Kevin Spacy, John Goodman, Adam Ant, Laurence Fishburne, Jennifer Grey, William H. Macy, Steve Buscemi, Ving Rhames, Meatloaf, and tons more.  The series was popular to warrant a movie version of the show years later.  Starring Denzel Washington as the Equalizer, the movie version was released in 2014.

After leaving his work as a government agent, McCall places an ad in the paper that reads:  "Got a problem, need help, odds against you, call The Equalizer."  And call they did.  The Equalizer went about the business of solving crimes in his no nonsense way.  Using his spy skills, and a number of spy gadgets, such as his ballistic knife, McCall would take care of business.  After serving years in what was basically the C.I.A., McCall felt that atonement could be achieved by offering his services for free, as troubleshooter, protector, investigator, etc.