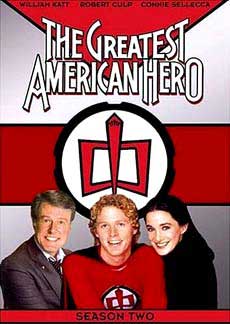 The Greatest American Hero was a comedy/drama/action show that ran from 1981 to 1983 on ABC.  The show starred William Katt as Ralph Hanley, Robert Culp as Bill Maxwell, and Connie Sellecca as Pam Davidson.  It is worth noting that Ralph’s original last name was Hinkley, but after the assassination attempt on President Reagan in March of 1981 by John Hinckley, Jr., ABC decided to change the character’s name.

The story behind this show was a little odd.  Ralph Hanley (Katt), a high school teacher, was taking his kids on a field trip in the middle of nowhere.  After the bus broke down, Ralph had to walk for help.  At some point, FBI agent Bill Maxell (Culp) nearly runs Ralph down, and when aliens show up and decide to endow Ralph with super powers and a cute super hero outfit, the aliens also tell Bill that he must help Ralph save the world.  After the clumsy Ralph lost the instruction booklet for the super suit, the comic relief came in his attempts to figure out how the suit worked by bumbling around, trying to master its powers (invisibility, x-ray vision, super speed, etc.).  But with Bill’s help, and the help of his lawyer girlfriend Pam (Sellecca), the group went about the business of recovering stolen weapons, interrupting terrorist plots, and effectively saving the day.