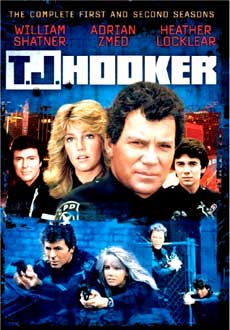 T. J. Hooker was a cop action drama that ran from 1982 to 1986 on ABC (CBS for the last season).  In this series, Captain Kirk (William Shatner) starred as T. J. Hooker, and the beautiful Heather Locklear starred as Officer Stacy Sheridan.  Other regular characters include Officer Vince Romano (Adrian Zmed) and Officer Jim Corrigan (James Darren).  At the time of this writing, it was rumored that a full feature film remake was in the works.

In this series, seasoned detective Sergeant Thomas Jefferson (T.J.) Hooker’s partner is killed in the line of duty.  A livid Hooker then vows to return to duty as a uniformed beat officer in order to rid the streets of the kind of criminal filth that killed his partner.  As the series progressed, Hooker and Romano teamed up as Unit 4-Adam-30, and Stacy and Jim teamed up as Unit 4-Adam-16.  Together, the two teams would often partner up to solve the crime and save the day.