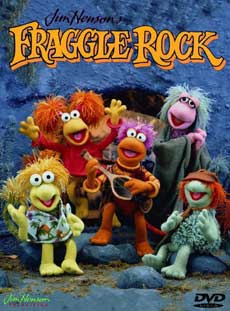 Fraggle Rock was a live-action Muppet Show spin-off that ran from 1983 to 1987.  The animated version of the show only aired for one season (1987), but then re-ran in the 1990’s on the Disney channel.  The Fraggles, a creation of Jim Henson, were little creatures that lived in a series of natural caves called "Fraggle Rock."  Each Fraggle had his/her own unique personality.  The main Fraggle characters were Boober, Wembley, Red, Mokey, and Gobo.

In a symbiotic relationship, the Fraggles must co-exist with other creatures like the Doozers and the Gorgs.  Fraggles were primarily happy-go-lucky little creatures, and Doozers were antish creatures, intend on hard work and industry (the opposite of the Fraggles).  The Gorgs were huge creatures that lived just outside of Fraggle Rock, and they considered Fraggles to be little more than pests.  Henson used the characters as a way to deal with some heavy subjects, like prejudice, conflict, religion, etc.