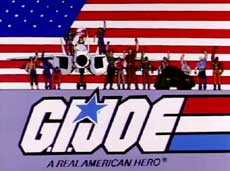 The G.I. Joe franchise is steeped in history, with references to World War II.  G.I. Joe comic books started long before the 1980’s, but in 1982, Marvel Comics began producing the G.I. Joe: A Real American Hero comic book series.  In addition, Hasbro released a very successful line of G.I. Joe toys, and an animated series was quickly born.  The G.I. Joe A Real American Hero cartoon began in 1983 after the release of a mini-series, and then the regular cartoon ran from 1985 to 1986.  The show’s run was capped of in 1986 with the release of G.I. Joe: The Movie.

The cartoon was basically about the G.I. Joe force battling the terrorist group called Cobra, and each episode focused on one character or another, with the goal of Hasbro to sell the toys.  Fans of the cartoon will remember that each episode began with the following narration:

"G.I. Joe is the code name for America's daring, highly-trained, Special Mission force. Its purpose: To defend human freedom against Cobra, a ruthless terrorist organization determined to rule the world".