Home » boob-tube » Cartoons & Kids » He Man Masters of the Universe

He Man Masters of the Universe 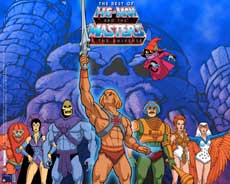 He Man and the Masters of the Universe was a very popular Saturday morning cartoon, based on the successful Mattel toy line, that ran from 1983 to 1985 (re-runs were aired on the USA Network in the late 1980’s).  Mattel initially developed the toy line in 1981, and by the mid 1980’s, He-Man was everywhere.  The cartoon even spawned the spin-off She-Ra: Princess of Power.

He-Man And The Masters Of The Universe 1984 Ad-kids' totals soaring every market
$15.00