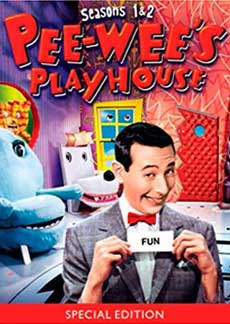 Pee-Wee's Playhouse was a children’s show that ran from 1986 to 1991 on CBS, and starred Paul Reubens as Pee-Wee Herman.  Reubens had created the Pee Wee character in 1980 as a live stage variety show, and HBO aired his first special shortly after.  By 1985, Pee-Wee had teamed up with Tim Burton to create the full feature film Pee-Wee’s Big Adventure, and soon after CBS approached Reubens for a Saturday morning series for children based on the Pee-Wee character.  Some other big names that starred on the show included Laurence Fishburne as Cowboy Curtis, Phil Hartman as Captain Carl, and Lynne Marie Stewart as Miss Yvonne.

Essentially, Pee-Wee had a wonderful home in the world of Puppetland that he called the Playhouse.  It was a magic place that had a number of magical object characters such as Jambi the genie, Chairry the armchair, Conky the robot, Pterri the Pteranodon, Clockey the clock, Globey the globe, and Magic Screen.  Although most of the show was live-action, there was some claymation and cartoons.  Many of the same gags and themes were repeated from show to show, like the “secret word” of the day, spoken by Conky the robot at the start of each show.  Regardless of the method or skit, the show essentially taught lessons in morality and ethics in a colorful way.