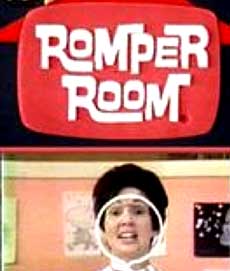 Romper Room was a kid's show that ran from 1953 to 1994.  It was aimed at preschoolers and could be franchised by local TV stations, who could produce their own versions of the show instead of showing the national telecast version.  Although filmed locally by each franchise, with local kids, everyone was required to follow a particular format.  In some areas, the waiting lists for kids to be on the show were booked up years in advance, in some cases before children were even born.  The kids, who were required to be four or five years old, were rotated out every two months.  At the time of this writing in late 2014, the current owner of the Romper Room trademark had plans to re-establish the brand.

Each show would basically follow the same format.  They would begin with a greeting from the hostess, the Pledge of Allegiance, and then a series of games, songs, exercising routines, and lessons around morality.  There would be a prayer, then a snack, and then Mr. Do Bee would stop by to implore children to “do be good boys and girls”.  At the end of each show, the hostess would look through the “magic mirror” and recite the rhyme:  "Romper, bomper, stomper boo. Tell me, tell me, tell me, do. Magic Mirror, tell me today, have all my friends had fun at play?"  She would then begin rattling off the names of children she saw out in TV land while looking through the magic mirror.