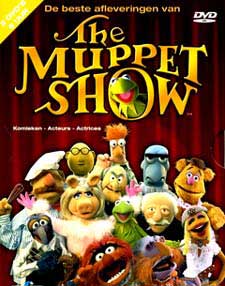 The Muppet Show was a comedy-variety show that aired from 1976 to 1981.  The show was created by puppeteer Jim Henson, and although it might be considered a kids show by some, it was geared towards a much wider audience.  The show was full of slapstick comedy and humorous parodies.  Each show featured a human guest star, and there were some very big names:  John Denver, Dudley Moore, Dom DeLuise, Elton John, Diana Ross, Roger Moore, and many more.  The Muppets proved to be so popular, that a number of full length movies were released through the 1980’s and beyond.

In this series, Kermit the Frog was manager of a variety show house, and it was his job to make sure a decent show was put on for patrons in the midst of chaos back stage.  Not only did Kermit have to keep the special guest stars happy, but he also had to deal with the shenanigans of the Muppet stage hands and regular characters.  There was a huge cast of Muppets, with some of the more recognized ones being Kermit, Mrs. Piggy, Animal, Beaker, Fozzie Bear, Gonzo, Rowlf the dog, Scooter, the Swedish Chef, and the hecklers Statler and Waldorf.  There were plenty of reoccurring skits, such as Muppet Labs, cooking with the Swedish Chef, Pigs in Space, and Wayne and Wanda.

Kermit The Frog Figurine The Muppet Show Kermit In Car
$4.99

Jim Henson's The Muppet Show Beauregard the Janitor by Palisades New in Box!
$36.00