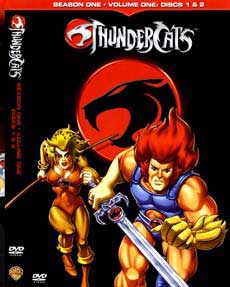 Thundercats was a popular cartoon that aired from 1985 to 1989.  Fans of this cartoon will remember that it was about a group of humanoid cats that were forced to relocate to a new planet.  Characters included Lion-O, Panthro, Jaga, Tygra, WilyKat, Bengali, Cheetara, Snarf, Pumyra, and Lynx-O.  In 1986, at the height of the show’s popularity, a made-for-TV movie was released called ThunderCats – HO!  There was also a comic book series back in the 80’s, as well as a ton of toys and even a couple of video games.  In 2011, a reboot of the show was attempted that only lasted for one season.

In this cartoon, the ThunderCats were a team of catlike humanoids forced to relocate to a planet called Third Earth after their home planet, Thundera, was destroyed.  During the escape to another planet, the Thunderean fleet is attached by the Mutants of Plun-Darr, who destroy every ship except the flagship, which is thought to contain the mystic Sword of Omens, which holds the “Eye of Thundera” (which gives the ThunderCats their power).  Eventually they make it to Third Earth, setting up a new home, but the Mutants manage to track them there, where they team up with an evil sorcerer on the planet, named Mumm-Ra, who wants the Eye of Thundera for himself.  Thankfully, however, the ThunderCats are able to thwart Mumm-Ra’s advances.