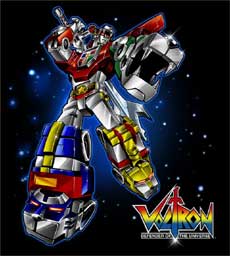 Voltron: Defenders of the Universe was a cartoon that aired from 1984 to 1985.  The show was about a team of space explorers who piloted their own ships, which could be combined into a huge robotic space ship called “Voltron”.  In the 1980’s, Matchbox imported the Lion Force and Vehicle Force Voltron die-cast toys from Japan, as well as releasing a series of smaller robots.  There was a TV special that aired in 1986.  In 2011, a new version of the show, called Voltron Force, was airing on Nicktoons, and at the time of this writing, a live-action Voltron movie was being developed.

The first season of Voltron was essentially an edited version of the Japanese show Beast King GoLion. In this series, the Voltron Force was in charge of protecting the planet Arus from the evil King Zarkon from the planet Doom.  Zarkon, with the help of his son Lotor and the witch Haggar, would unleash Robeasts on the people of Arus.  Season 2 was based on the Japanese show Armored Fleet Dairugger XV, which was about the Galaxy Alliance’s quest to find new planets to colonize, and the evil Drule Empire’s attempt at stopping them.