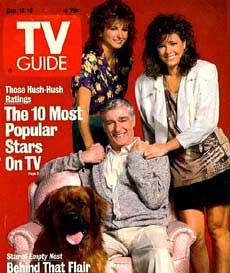 Empty Nest was a sitcom that ran from 1988 to 1995 on NBC.  This show, a spinoff of the Golden Girls, revolved around the lives of a widowed pediatrician, named Harry Weston (Richard Mulligan), and two daughters of his daughters, Barbara (Kristy McNichol) and Dinah (Carol Weston).  There was also a big dog, Drefyuss, that also played more than a small role.  The Westons were neighbors of the Golden Girls, who would drop in from time to time.  Another main character in the show was another neighbor, named Charley Dietz (David Leisure), a cruise ship employee who would drop in from time to time.  In the late 1980’s and early 1990’s, this show was a huge hit.

Harry's daughters, who have moved back into his home to comfort him after his wife dies, constantly try to find the next woman for him.  Barabara (McNichol) was a tough under-cover cop, and Carol (Manoff) was a high strung divorcee.  The two sisters would often bicker while vying for their father’s attention.  When McNichol left the show in 1992, the youngest Weston daughter who had been away at college, Emily (Lisa Reiffel), joined the cast.  After one season, she left, and Carol was the only daughter left, until McNichol showed up for the final episode.