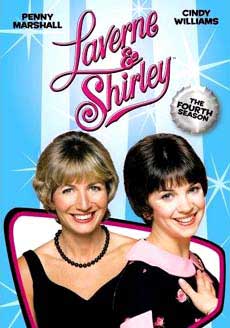 Laverne and Shirley was a situation comedy that ran from 1976 to 1983 on ABC.  The show starred Penny Marshall as Laverne De Fazio and Cindy Williams as Shirley Feeney.  It was a spin-off of the show Happy Days, with the two girls being featured on the Happy Days as friends of Fonzie.  It was not unusual to see other characters from Happy Days on the show.  Other major characters included Lenny Kosnowski (Michael McKean) and Squiggy Squigman (David Lander).  The show became a huge success, becoming even more popular than Happy Days.  A few of you may remember the short-lived Saturday morning cartoon that was spawned from this show titled Laverne & Shirley in the Army.  It is also worth mentioning that both Laverne and Shirley, and Lenny and Squiggy, created in-character vocal albums that were released in 1976 and 1979 respectively.

The show was set in the late 1950’s through the late 1960’s.  Laverne and Shirley were roommates who both worked as bottle-cappers for a local Milwaukee brewery called Shotz.  By the end of the season, the two had moved to California, and towards the end of the run, Cindy Williams had left the show.  The ladies lived in a basement apartment, and Squiggy and Lenny lived upstairs.  For the most part, the comedy was slapstick, although occasionally a more serious topic would be broached.  On the one hand, you had episodes like when Laverne was attacked by a department store robot and decided to sue the store, and on the other hand you had episodes like the one where Shirley’s alcoholic brother comes home from the Navy.