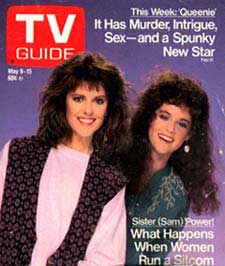 My Sister Sam was a situation comedy that aired from 1986 to 1988 on CBS.  In this series, Pam Dawber played the role of a San Francisco photographer named Samantha "Sam" Russell, and her sister Patti Russell was played by Rebecca Schaffer).  Dawber had played the role of Mindy on Mork and Mindy.  Other major characters were J.D. Lucas (Joel Brooks), Dixie Randazzo (Jenny O’Hara), and Jack Kincaid (David Naughton).  The first season had very good ratings, but they fell sharply thereafter.  After the series was canceled, Rebecca Shaffer was murdered by an obsessed fan.

In the show, 29 year old Samantha Russell (Dawber) was a freelance photographer living in San Francisco.  Life gets interesting for Sam when her little sister Patti (Schaffer) shows up at her door declaring she is moving in.  Most of the action for this show took place in their apartment, with regular characters stopping by to mix things up.  J.D. (Brooks) was Sam’s neurotic agent, Dixie (O’Hara) was her assistant, Jack (Naughton) was her womanizing neighbor who often dropped in to keep things interesting.