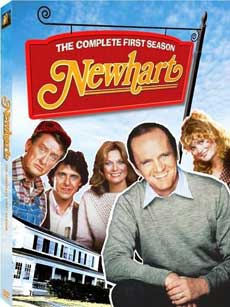 Newhart, which ran from 1982 to 1990 on CBS, was a comedy sequel to The Bob Newhart Show (1972 to 1978).  The show starred Bob Newhart as Dick Loudon, Mary Frann as Joanna Loudon, Tom Poston as George Utley, and of course William Sanderson, Tony Papenfuss, and John Voldstad as brothers Larry, Darryl, and Darryl.  The show was a huge hit, finishing in the top 25 Nielsen ratings for six of its eight seasons.  Although CBS offered a 9th season to Newhart, he declined.

Fans of this show will remember that Dick Loudon (Newhart), and his wife Joanna (Frann), move from NYC to Vermont, where they buy a small hotel.  Dick is a writer, and eventually lands a job as the host of a show called "Vermont Today."  Dick is a level-headed “normal” guy, living in a town of oddballs and eccentrics.  The comedy of the show revolved around Dick’s interaction with these nutty locals.  In the very last episode of the series, it was revealed that the entire show as simply a dream of Newhart from the set of The Bob Newhart Show.