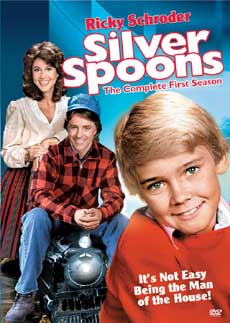 Silver Spoons was a family comedy that ran from 1982 to 1987 on NBC.  The show was essentially about the life of a kid growing up in a rich family.  That rich kid, Ricky Stratton, was played by Ricky Schroder.  Joel Higgins played the role of Edward Stratton III, and Erin Gray played the role of Kate Summers Stratton.

Fans of this show will remember that Ricky Stratton (Schroder) was the son of a boy-at-heart millionaire named Edward Stratton III.  Ricky had not grown up with his father, but met him for the first time as a young boy.  Edward ran a toy company called Eddie Toys, which is where his wealth came from, in addition for his childish behavior.  He was not aware that he had a son.  As the series progressed, we found it was often Ricky that would act more grown up than his father.  Although their mansion was full of trains, video games, and whatever you can think of, it was Edward's goal to try and not raise a spoiled son.