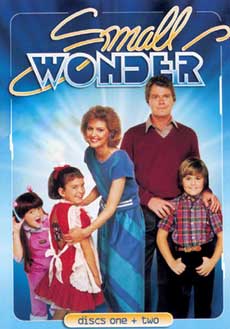 Small Wonder was a quasi-science fiction comedy show that ran from 1985 to 1989.  The show was about the family of a robotics engineer who managed to secretly create a life-like female robot that he tried to pass off as his daughter.  The show starred Tiffany Brissette as the robot Vicki, Dick Christie as Ted Lawson (the father and Vicki’s creator), Marla Pennington as John Lawson (Ted’s wife), Jerry Supiran as Jamie Lawson (their son), and a bratty neighbor girl named Harriet (played by Emily Schulman).

In the show, Ted created Vicki (Voice Input Child Identicant) with the goal of eventually helping handicapped children.  Vicki was a super-human android, with super strength, super speed, and an atomic power source.  Although Vicki had no emotions and spoke in a monotone voice, the family managed to keep her true identity a secret, even as she attended school.  While not in use, Vicki lived in a cabinet in Jamie’s room.  As the seasons progressed, Vicki became more and more human like.