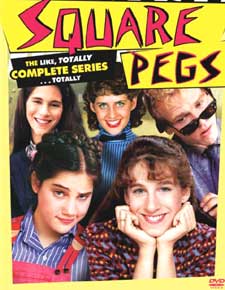 Square Pegs was a rather short-lived comedy that ran from 1982 to 1983 on CBS.  This series was about two nerdy friends, Patty Greene (Sarah Jessica Parker) and Lauren Hutchinson (Amy Linker), who tried to fit into the cliques at Weemawee High School.  The show was created by SNL writer Anne Beatts, and although geared towards a teenage audience, some of the subject matter was considered risqué by 80’s standards.  Early on, the show had very good ratings, and despite the fact that critics liked it, the ratings fell sharply and the show was subsequently canceled.

Patty (Parker) was a smart and well-adjusted teenager, but a bit awkward, not quit fitting in (a “square peg”).  Her best friend Lauren (Linker) is a bit overweight and even more awkward than Patty.  Lauren very much desired to hang out with the cool kids, and much of the show’s premise revolved around Lauren dragging Patty into some scheme that will land the duo in the right clique.  Fans of the show will remember that each episode began with the following dialogue:

Lauren: "Listen. I've got this whole high school thing psyched out. It all breaks down into cliques."

Lauren: "Yeah, you know. Cliques. Little in-groups of different kids. All we have to do is click with the right clique, and we can finally have a social life that's worthy of us."

Patty: "No way! Not even with cleavage."

Lauren: "I tell you, this year we're going to be popular."