Home » boob-tube » Comedies » Who's the Boss 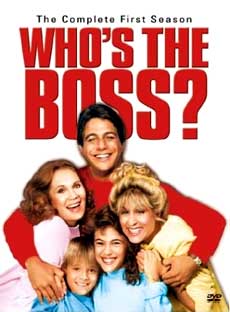 Who's the Boss was a family comedy that ran from 1984 to 1992 on ABC.  The show starred Tony Danza as Tony Micelli, Judith Light as Angela Bower, Alyssa Milano as Tony’s daughter Samantha, Danny Pintauro as Angela’s son Jonathan, and Katherine Helmond as Mona Robinson (Angela’s mother).  Although the show initially had a lukewarm reception from fans and critics, it quickly became a Nielsen hit, winning a number of Emmys and Golden Globes.

In this show, Tony Micelli (Danza), a former major league baseball player, takes a job with advertising executive Angela Bauer (Light) as her live in housekeeper.  Angela, who is divorced, as a son, and Tony, who is also divorced, has a daughter.  Much of the comedy revolved around this mixed “family” and the situations they found themselves in, in addition to the repressed romantic feelings between Angela and Tony.  As the years role on, the two families become one in spirit.  Although by the end of the show Tony and Angela had professed their love for one another, the show did not end with the two of them getting married.