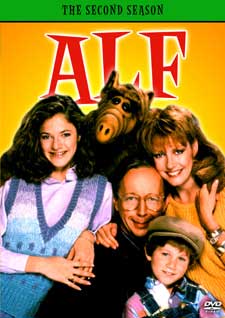 ALF, a good natured family comedy, ran from 1986 to 1990.  ALF was a puppet who actions and voice were controlled by Paul Fusco.  Max Wright played Willie Tanner, Anne Schedeen played Kate Turner, and the turner kids were played by Andrea Elson (Lynn) and Benji Gregory (Brian).  The show was widely popular, and continues to be one of the golden shows of the 1980's.  Some of you will even remember the short-lived ALF animated series (prequel) that ran from 1987 to 1988, and the comic book series that ran from 1987 (total of 50 issues).  At the time of this writing in late 2015, an ALF full feature CGI film was being considered.

In this show, an arrogant alien named Gordon Shumway, aka ALF (Alien Life Form), crashes into the garage of the Tanners house after he following a short-wave radio signal to earth.  Not knowing what to do with him exactly, and feeling a bit sorry for him, the Tanners offer to hide him out in their garage to keep him from getting caught by the Alien Task Force.  His home planet of Melmac had been destroyed in a nuclear holocaust, so ALF was effectively homeless.  The rest of the series is about ALF's interaction with the Tanners and other family friends.

It is interesting to note that each episode took 20 to 25 hours of taping to complete due to the tedium of working around a raised stage and the puppet.  It is said that the cast was not really that upset when the show finally ended in 1990.  More relieved than anything.