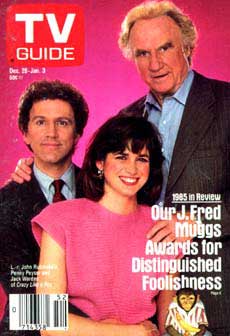 Crazy Like a Fox was an hour long detective comedy/drama that ran from 1984 to 1986 on CBS.  It ran for two seasons with a made-for-TV reunion movie, titled “Still Crazy Like a Fox”, that capped off the show in 1987.  The series starred Jack Warden as Harry Fox and John Rubinstein as his son, Harrison Fox.  Initially, the show did very well, but some time slot changes by CBS ultimately caused its downfall.

The premise of the show was simple.  Harry Fox (Warden) was a happy-go-lucky private investigator who used common sense and instinct to solve his cases, often employing the help of his high strung son, Harrison (Rubinstein).  Harrison had little interest in getting involved in his father’s cases, but his father often snookered Harrison into helping in some way or another.  Fans of the show will remember that each episode began with a phone call between father and son, whereby Harry would ask Harrison for something simple, like a ride somewhere, knowing full well his plan was to drag him into his case.