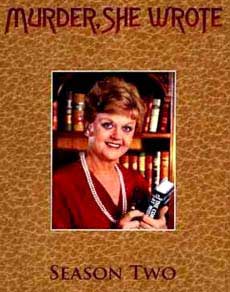 Murder She Wrote was an award winning 1984 to 1996 crime drama that featured tons of guest appearances by some of the hottest stars.  Angela Lansbury starred as amateur detective Jessica Fletcher, for a total of 12 seasons and 264 episodes.  It was one of the most successful and longest running shows to date, with an estimated 23 million viewers at its pinnacle.

Fans of this show will remember that Jessica Fletcher (Lansbury), a retired English teacher and successful crime novelist, returns home to Cabot Cove, Maine to be closer to her roots.  She then goes about the business of solving crimes, proving to be more perceptive than local investigators who seem to mistakenly go with the most likely suspect.  To keep things interesting, the viewer never knew if the famous guest star for the week would turn out to be victim or perpetrator.  The murders and investigations were not limited to Cabot Cove’s general vicinity, but instead all over America.  For example, by season 8, Fletcher had moved to NYC.

MURDER SHE WROTE show script "The Strangest Of Bargains
$9.00