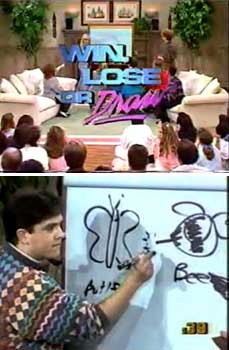 Win, Lose or Draw aired from 1987 to 1990 on NBC and was first hosted by Bert Convy.  It is worth noting that a Teen Win, Lose or Draw ran in the late 80's on the Disney Channel.  The original show featured two teams:  Men versus Women.  Both teams consisted of a single contestant and two celebrities.  Teams would try to guess a phrase or the title of something being drawn by one of their teammates on a large drawing pad.

As the teammate would draw, he/she was not allowed to speak or to use any letters, numbers, or symbols.  If one of the drawer's teammates said one of the words in the phrase/title, the drawer was allowed to write that word down on the pad.  For the first three rounds, teams had 1 minute to solve the puzzle.  If after 30 seconds the drawer felt he/she could not make the guess happen, he/she could hand the marker off to another teammate, but the value of solving the puzzle would drop in half.  The second round was a speed round, where teammates would guess on simpler words in a 90 second period.  The contestant on the winning team at the end of the show would net the pot + $1000 dollars.  If there was time at the end of a show, an audience member would be called up to draw a phrase and potentially win $100.