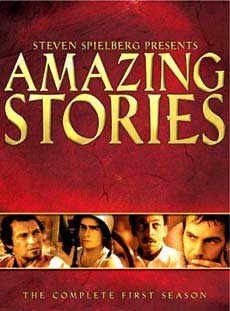 Amazing Stories was an NBC Horror/Sci-Fi/Fantasy show created by Steven Spielberg that ran from 1985 to 1987.  The series did very well, being nominated for 12 Emmy Awards, 5 of which it won.  Regardless of its success with critics, it was not well received by the general public, which explains why it only ran for 2 seasons.

Some of the episodes were directed by Spielberg, while others were directed by heavy hitters like Michael Moore, Burt Reynolds, Martin Scorsese, Danny DeVito, Robert Zemeckis, and Clint Eastwood.  There were tons of guest appearances by a number of well known stars.  The show was a lot like Tales from the Crypt and The Darkside, with episode titles like "Ghost Train", "Mummy Daddy", "Grandpa's Ghost", and many more.