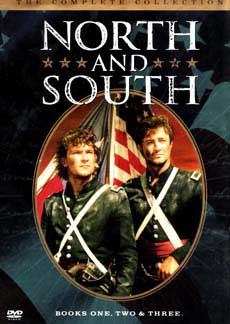 The North and South was a TV mini-series based on the 1980's trilogy of novels, about the Civil War, written by John Jakes.  All three books were converted into a mini-series on ABC (1985, 1986, and 1994).  Although the third installment in 1994 did not do well with critics, the first two were very popular.  The original North and South (1985) is still ranked as the 7th highest rated mini-series in TV history.

The mini-series essentially tells about the enduring friendship between two West Point graduates on different sides of the Civil War.  On one side, there was George Hazard (played by James Read),  whose family was part of the industrialized north,  and on the South side, there was Orry Main (played by Swayze), who family were slave owners.  As the hostilities between the North and South test the resolve of the country, so too is their friendship tested.