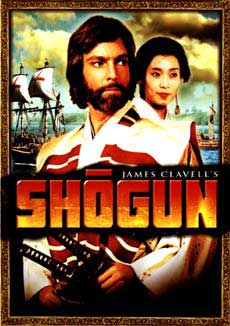 Shogun was a 10-hour mini-series that aired in 1980 on NBC.  The series was based on the novel Shogun written by James Clavell.  At the time of this writing, it was the only US TV show to have been completely filmed in Japan.  The series was narrated by Orson Welles and starred Richard Chamberlain as Jack Blackthorne.  The series was highly regarded by critics and influenced a number of other notable 80’s mini-series productions such as the North and South and the Thornbirds.

In this series, John Blackthorne (Chamberlain) is a 17th century English ship captain.  After his ship, the Erasmus, wrecks off the coast of Japan, Blackthorne is thrust into the culture of Japan, where he tries to maintain his English roots but still blend in with the Japanese.  Blackthorne ends up an object of interest of Lord Toranaga, a Samurai competing for the title of Shogun.  Blackthorne forms an alliance with Toranaga, who helps Blackthorne assimilate into Japanese culture.  What Blackthorne did not know, however, was that Lord Toranaga felt Blackthorne’s landing in Japan to be his destiny, and that Toranaga would never let him return home.