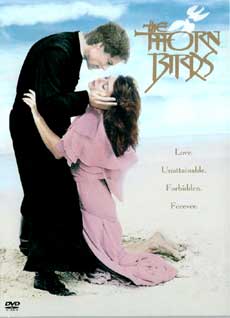 The Thorn Birds was an award winning mini-series that originally aired in March of 1983 on ABC.  This mini-series was based on a novel by Colleen McCullough, which was about the life of the Cleary's, a family that emigrated from New Zealand to Australia in order to take over the operations of the family ranch.  The show starred Richard Chamberlain as Ralph de Bricassart and Rachel Ward as Meggie Cleary.  The series was a huge success, ranking as the second highest rated mini-series on all time.

The show was set in a sheep station in the Australian Outback, and it focused on three generations of the Cleary family spanning from 1920 to 1963.  The Cleary’s left New Zealand for Australia in order to run their aunt Mary Carson’s sheep ranch.  The story focused on daughter Meggie Cleary (Ward) and her love for the family’s priest, Father Ralph de Bricassart (Chamberlain).  Although Meggie eventually married somebody else, eventually Meggie and Ralph are reunited.  The two had a son during an earlier time in their life, and by the end of the series, both their son and Ralph die, throwing Meggie into a deep depression.

The title of the series (and book) refers to a mythical bird that, from the day it hatches from the egg, searches for a thorn tree that contains the perfect thorn.  Once the bird finds that perfect thorn, it impales itself upon it, and then sings a beautiful song until it finally dies.