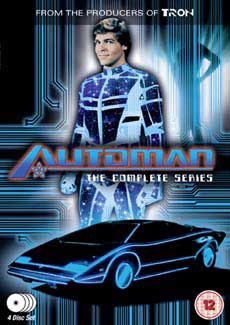 Automan was a short-lived (1983-1984) sci-fi ABC series about a police department computer nerd who creates a computerized detective named Automan.  The show was influenced by the movie Tron, which was released the previous year.  The series starred Desi Arnaz, Jr. as Walter Nebicher and Chuck Wagner as Otto J. Mann (Automan).

The show followed the adventures of police officer and computer programmer Walter Nebicher (Arnaz), who created an artificially intelligent computer program that featured a holographic character called the Automan (Wagner).  Walter had the ability to mentally merge with Automan and control his actions, while at the same time making use of his invulnerability.  And don't forget about the little polyhedron droid called "cursor," that would artificially create, on command, any and all tools necessary for Automan to save the day (including the Auto Car).