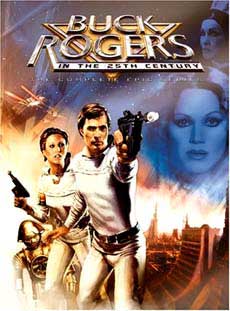 Buck Rogers in the 25th Century was a sci-fi showed based on a radio show and movie from the 1930's.  The TV show ran for two seasons on ABC, from 1979 to 1981, proceeded by a full featured film in 1979.  The TV series starred Gil Gerard as William "Buck" Rogers and Erin Gray as Colonel Wilma Deering.

In this TV show, William "Buck" Rogers, a 1980's astronaut, is subjected to a freak space accident which forces him 500 years into the future (he was frozen in space in the 80's and thawed out in 2491).  After nuclear war and invasion from the Draconians, the Earthlings press on, exploring space in search of lost earth colonies, and Buck is hired to protect the earth from the evil Princess Ardala (played by Pamela Hensley).

Much of the show was about Buck's attempts at fitting in to the 25th century.  He was often assisted by his some times love interest, Colonel Deering (Gray), as well as his robot sidekick, Twiki, and a sentient computer thing called Theo that was often found around Twiki's neck.