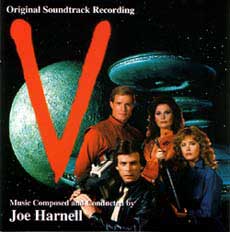 V: The Series was a rather short-lived TV sci-fi series that aired from 1984 to 1985 on NBC.  The showed started as a mini-series called V: The Final Battle, which aired in 1983, and then grew into a regular series due to the popularity of the mini-series.  The regular series ran from 1984 to 1985, and was basically a continuation of the mini-series.  The show starred Jane Badler as Diana (Supreme Commander of the Visitors), Marc Singer as Mike Donovan (co-leader of the Resistance movement), Faye Grant as Juliet Parish (founder of the Resistance), and Robert Englund as Resistance member Willie.  The show had a reboot in 2009 that lasted for two seasons.

In the TV series, those aliens that survived the attempted biological annihilation in the mini-series became immune to what initially wiped most of them out, and those alien visitors that remained began to take over the world (starting with the USA).  It turned out that the Red Dust bacterium required cold climates to regenerate, so the Visitors, led by Diana (Badler), decided to start by attacking warm cities like Los Angeles.  Although 50% of the earth remained off limits to the Visitors due to the lingering toxins, the Resistance movement was forced to battle the alien Visitors in those areas they had infiltrated.