Listen for free or download any Juice Newton track for just 12 cents per song! 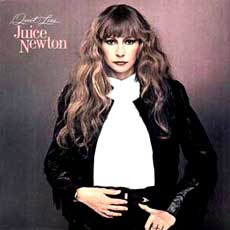 Judy Kay "Juice" Newton was one of the view country western singers who bridged the American pop boundary in the 1980's.  Newton was born in New Jersey, grew up in Virginia, and started out in a band called Juice Newton and the Silver Spur (early 1970's).  Juice Newton and the Silver Spur released two albums in the mid 70's on the RCA label, and a few of you may remember their minor hit single "Love Is a Word".

By 1977, Juice Newton was a solo act.  Although she did have some minor chart hits in the late 1970's as a solo artist, it wasn't until the 80's that things began taking off for her.  Her first top 40 country hit song was "Sunshine", which was released on Take Heart (1980).  Most of you will remember her 1981 album, Juice, which featured a number of hit songs that charted both on the country charts, and on the Billboard charts as well:  "Angel in the Morning", "Queen of Hearts", and "The Sweetest Thing (I've Ever Known)".  Her 1982 release, Quiet Lies, also featured several charting cross-over songs, like "Love's Been a Little Bit Hard on Me", "Break It to Me Gently", and "Heart of the Night".

As the 80's rolled on, Juice lost her pop status, but continued producing hit country songs, such as "You Make Me Want to Make You Mine", "Hurt", "Old Flame", "Both to Each Other (Friends and Lovers)" with Eddit Rabbitt, "What Can I Do with My Heart", and "Tell Me True".  Although Newton released new material in the 1990's and beyond (as late as 2010 at the time of this writing), she was never able to re-gain the spark of the 1980's.  The Juice Newton Discography is as follows:

Listen for free or download any Juice Newton track for just 12 cents per song!