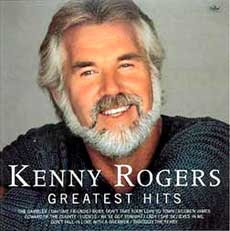 Kenny Rogers' is one of the few country music stars that we featured on ilovethe80s.com.  We include him due to the fact that like Juice Newton, Eddie Rabbitt, Dolly Parton, and others, Kenny Rogers made the jump from the country charts to the pop charts.  And of course who can forget his career as an actor (The Gambler, etc.).

Rogers stared his music career in the 1950's.  He started out as a band member before trying his hand as a solo artist.  In the 60's, his band was called Kenny Rogers and the First Edition, and they landed a number of charting country hits.  It was in 1976 that he returned to a solo career.  Although Kenny Rogers did have a number of country hits in the 1970's, we will focus on his contribution to 80's pop.

In 1980, Kenny and Kim Carnes released the song "Don't Fall in Love with a Dreamer", which started his pop chart success.  That same year, Rogers' joined forces with Lionel Richie as a producer, and the album Share Your Love (1981) featured a number of hit songs:  "Lady", "I Don't Need You", "Through the Years", and "Share Your Love with Me".  Other 80's pop hits included "Love the World Away", from the Urban Cowboy movie soundtrack, the title track and "A Love Song" from Love Will Turn You Around (1982), "We've Got Tonight" with Sheena Easton and "All My Life" from We've Got Tonight (1983), "Islands in the Stream" with Dolly Parton and "This Woman" from Eyes That See in the Dark (1983), "Crazy" from What About Me (1984), "Morning Desire" from The Heart of the Matter (1985), "Twenty Years Ago" from They Don't Make Them Like They Used To (1986), and "When You Put Your Heart in It" from Something Inside so Strong (1989).

Kenny Rogers continued producing new material throughout the 1990's and beyond, and he was still active at the time of this writing in late 2013.  And of course many of you know that Rogers is a entrepreneur and have eaten at one of his restaurants (Kenny Rogers Roasters).  They Kenny Rogers Discography is very long: