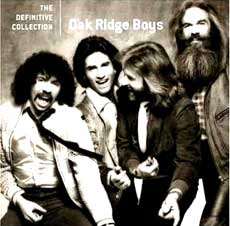 The Oak Ridge Boys was a country and gospel quartet that became one of the few country acts to cross over from the country charts to the Billboard charts.  The begins of the band can be traced all the way back to the 1940's with a band called Wally Fowler and the Georgia Clodhoppers.  They were asked to play so often for a military installation in Oak Ridge, TN, that they eventually changed their name to the Oak Ridge Quartet, and later to the Oak Ridge Boys.

The Oak Ridge Boys released tons of material well before the 1980's, but we will focus on the late 70's and 80's in this feature.  It wasn't until 1977 that the band switched from gospel to full country music.  They had a number of top country hits in the late 70's, such as "I'll Be True to You", "You're the One", "Leaving Louisiana in the Broad Daylight", "Dream On", "Sail Away", "Come On In", "Cryin' Again", and Y'all Come Back Saloon".  They kept the country hits rolling throughout the entire 1980's.  Tons of number 1 US country hits, too many to list here.  What we will mention here are the two songs that were also Billboard cross-over hits:  "Elvira", from Fancy Free (1981), and "Bobbie Sue" from Bobbie Sue (1982).

The Oak Ridge Boys continued producing well into the 1990's, 2000's, and 2010's, with some country chart success, but not nearly like the good old days.  The Oak Ridge Boys Discography (70's and beyond only), is as follows: